We often get asked about radio reception on VAG (VW, Seat, Skoda & Audi) models because the new stereo is not as receptive as the original one. So...

WHY IS THE RADIO SIGNAL ON MY BRAND NEW RADIO NOT AS RECEPTIVE AS THE STANDARD HEAD UNIT?

Well, when it comes to VAG application such as Volkswagen and Audi, the most common reason is getting the correct aerial adaptor installed and fitted correctly. If your'e not from the audio world, you won't really know straight away about the different aerial systems on the VAG applications, so lets explain. You generally have two aerial systems from them:

1. Standard - where the car aerial is mounted on the roof like you normally expect.

2. Diversity - this is usually discreetly mounted on the rear window. It runs on the window just like the heater elements in the window to defrost the car in the winter.

So with this in mind, if your signal is poor then you may require a different aerial adaptor to what came with the head unit. With Volkswagen & Audi, they actually have 6 types of aerial adaptor available.

Our head units generally come with the more common single or double fakra non amplified aerial adaptor as standard. However, these pick up a poor signal if connected to the Diversity aerial system because the adaptor needed to work with the Diversity system needs to be amplified. If you have the Diversity system then you would need the double fakra amplified aerial adaptor. With a diversity aerial system, one fakra is for FM and the other is for AM. The aerial is also amplified for a signal boost so the blue wire from the adaptor needs to be connected to the relevant 12v source on the head unit.

WHAT IS THE DIVERSITY AERIAL SYSTEM?

Diversity aerials ensure the best reception quality even when the available radio signal is poor. High-rise buildings and hills reflect the electromagnetic waves from radio and television transmitters. For this reason, an aerial receives not just one signal, but also staggered signal reflections, which may impair reception quality. This is referred to as multi-path interference. With the Diversity Aerial system, the radio signal is received by more than one aerial (up to four) and the receiver filters out the signal interference by intelligently combining the signals from the different aerials.

WHAT IS A FAKRA CONNECTION?

FAKRA is a standard developed by the DIN group, which specifies the electrical performance and interface of RF connectors for use in road vehicle applications. Basically, it looks like this: 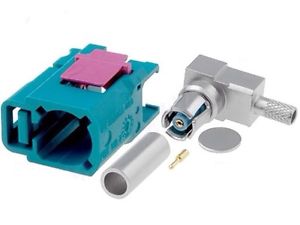 PLEASE NOTE: This is the Fakra connection disassembled. Obviously, when built up and ready on your car, the silver fittings are inside the blue, green or white housing.

WHERE DOES THE BLUE WIRE ON THE AERIAL ADAPTOR CONNECT TO? 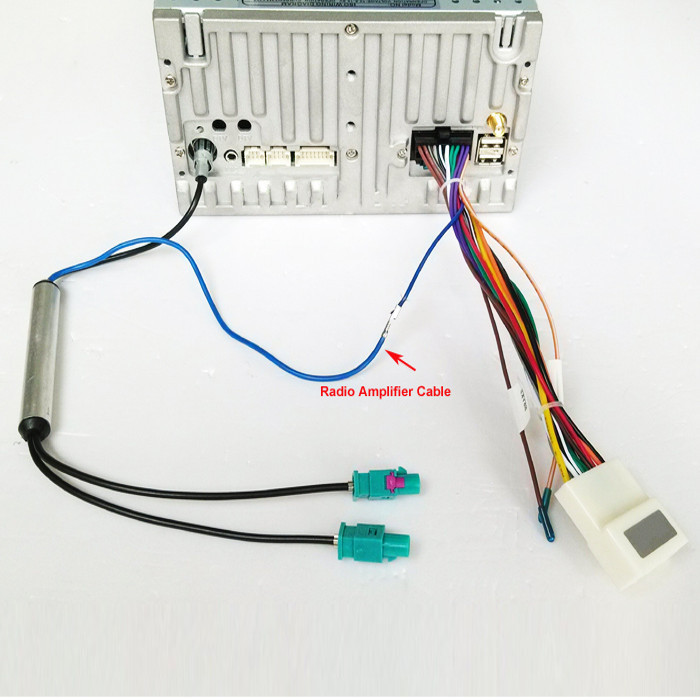 WHY DON'T YOU JUST INCLUDE ALL THE AERIAL ADAPTORS IN THE BOX?

The simple reason is cost. If we included every aerial solution then it would increase the cost of the product significantly. You would also have paid for 3 aerial adaptors that will then be redundant.

Hopefully this sheds some light on the subject and helps you with your installation :)